A New New Testament” is the controversial work of a group of 19 scholars referred to in the book as the New Orleans Council. Edited by Hal Taussig, who also wrote extensive introductory matter, “A New New Testament” includes 10 “recently discovered works” that the council chose as being ancient manuscripts that complete and update the standard Christian New Testament. Taussig said in an interview that “Although the western branch of Christianity has implied that the Bible is eternally stable, this has really never been the case. Both now and for the past 400 years Catholics and Protestants don’t agree on what is in the Bible, and neither do Episcopalians and Lutherans.  Internationally the eastern Orthodox, Ethiopian, and Syriac Bibles all contain different books than the western Catholic and Protestant Bibles.  From this perspective ‘A New New Testament’ is simply yet another variation on what is in the Bible and what is not.  From another perspective, it is the first edition of a Bible ever to include the gospels, letters, and prayers that have been recovered from in recent times.

Learners will need to obtain this book for this class.  A New New Testament edited with commentary by Hal Taussig.

This course is eligible for 1.0 CEU. 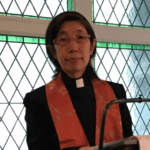 Dr. Asayo Okumura Thomas is an ordained minister in the United Church of Christ of the Metropolitan Association, New York Conference.

She was born and raised in Japan, breathing in the grace and embraced by the love through her mother’s bodhisattva sutra chanting. Her doctoral research project at the New York Theological Seminary was “The Sea of Silence: Ceaseless Renewal of the Mind and Heart in Unification of the Trinity through Mindful Meditation.”

Currently, she serves at the Community Church of the Pelhams as an assistant pastor for spiritual development. Her spiritual gift is to invite people to open their hearts gently and naturally to be reunited with the love of God through a mindful meditation with biblical verses in Lectio Divina or the ancient Mystic method.  She loves to be in nature, like floating on the ocean wave, walking in the forest communicating with trees, and contemplating in birds singing or simply silence.