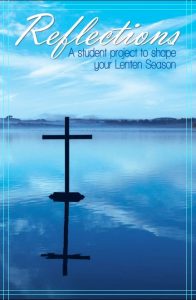 This post is part of a series of Lenten reflections using worship songs to engage the journey of Lent. Each reflection involves meditation on one song and a portion of scripture from the Gospel of Luke. These reflections are a part of the senior project of Southwestern College student Mallorie Coffman. Graphic design by Maggie Collett.

You may use the Chapters for Reflection from the Gospel of Luke to shape your approach to these lyrical meditations. The author has also provided shorter focus verses.

The word “awesome” is thrown around often in the English language. “I did awesome on that test.” “That 3-point shot was awesome.” People miss the true meaning of awe. To be in complete awe of something is to have an overwhelming inspiration and wonder of something that is both grand and powerful. The song echoes to be “in awe of the One who gave it all.” Take this moment to be in awe of God’s beautiful creation of Earth and His people, of Jesus’ life on Earth and death on the cross, of God’s presence and work in your life.

This song speaks of God’s unending praise for the wonders He has given us through creation and his Son. Near the end of the song, the artist promises his heart and surrenders his soul to the Lord. As Holy Week comes closer, think deeply about Jesus’ sacrifice for our sins. Have you spoken with God lately about your relationship with him? Are you willing to offer your whole heart completely to God right now? If not, what’s holding you back?

The Pharisee spoke loudly of his own excellence and holiness as he exalted himself publically to all who could hear and yet he called this prayer to God. It is easy to see the mistakes and flaws in the Pharisee, but it can be more difficult to witness the same mistakes in yourself. Often in life, the justification of our actions says as much about us as the action committed. Is there a time when you justified your sin by comparing yourself to someone more sinful than you? Or by trivializing your own actions instead of standing before God with an open heart?

Jesus’s parable contrasts two forms of prayer. The Pharisee’s loud and self-praising prayer and the tax collector’s silent and self-deprecating prayer. Jesus makes it obvious which he prefers — the humbling, honest prayer. Why was Jesus so condemning of the prayer of the Pharisee, the man religiously observed the Law, and approving of the tax collector whose career offered so much temptation and opportunity to publically sin? Why would this parable have been so striking to the popular culture of Jesus’ time and how can it be applicable in today’s times?

God has never ceased loving a single one of his people. He stands before our failures and shame, and yet there is nothing that can change God’s love for His children. Is there a failure in your life that you have yet to lift up to God for forgiveness because you fear God’s disappointment? With an open heart bring your sins to Him. Be confident that God’s love for you is everlasting and unconditional.